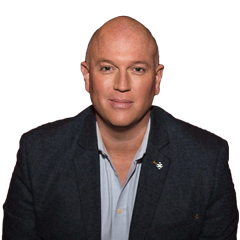 Samie is an award-winning speaker, author and leadership consultant. He is recognised as one of the world's leading authorities on organisational values and culture change and was named Most Visionary Business Transformation CEO in the Global CEO Excellence awards, voted Game Changer of the Year by ACQ Global, and Most Influential CEO of the Year 2020 by CV Magazine.

Samie's career spans six continents, working with governments and organisations around the world to create high performance cultures underpinned by values. In 2019, he did a TED talk on Why Business Needs Our Humanity and created the hashtag #time4humanity which brought humanity to the forefront of leaders’ hearts and minds.

As CEO of Marmalade Fish, Samie leads a team of world class facilitators and coaches to bring humanity to business and reach 1 million people by 2020. Marmalade Fish has been named Best Organisational Change Consultancy and Change Management Company of the Year for three consecutive years, and is the first and only certified B Corporation in the GCC.

Samie has a double first class degree from the University of Durham, a Master's with distinction from the University of London, and studied Leading Global Businesses at Harvard Business School. His passion is aviation and hopes one day to own a retired 747! Samie loves exploring nature trails while listening to intrigue and true crime podcasts. He is a Reiki Master and regularly participates in neurofeedback training to access different brainwaves and states of consciousness (delta being his favourite).

Samie is a Fellow of the RSA, and a Chartered Fellow of CIPD, ILM, ITOL and CMI. He is also an NLP practitioner, systemic and executive coach, certified international Senior Professional in Human Resources (SPHRi), and assessor with the British Psychological Society.